An apprentice must step in to save the village after the smithy's untimely demise.

Craft weapons. Slay them before time runs out!

If you click on the monster too soon, or you click on weapon parts that aren't in the blueprint, you will lose 1 second.

Credit where credit is due!

These nice folks released this content for free. It was used to build Teeny Tiny Smithy.

This game is a submission for the TeenyTiny DragonRuby MiniGameJam - "where the goal is to make minigames that are small, simple and short."

My experience with DragonRuby GTK as a game platform has been great so far.  If you are a video game enthusiast with interest in a 2D engine, check it out.

This is a neat little concept that feels like it could definitely be expanded on. My one big complaint is that, at least in the web version, the in game cursor lagged behind my actual mouse movements a lot, which made the whole thing harder than I felt like it should have been, and for the wrong reasons.

Edit: I thought of one more sort of criticism. With such tight timing, I needed to focus on the stuff on the screen I needed to interact with, which meant I rarely had the chance to read the flavor text on the top or really take in the enemy sprites.

But even with those, I still enjoyed myself and would be interested in seeing more.

I think those are valid points - mouse cursor in particular.  I'm prototyping another game right now and hoping to bring some of that experience back to an update for Teeny Tiny Smithy.

Good luck, I look forward to seeing What else you’ve got.

You did a very nice job :

I did. When I played, I wiped out all the monsters on the first level and I thought that was a whole game, haha. I was much surprised when the options multiplied!

This concept has a lot of potential! I didn't realize I was in the tutorial at first and thought the game wasn't working, so it might help to have an intro screen with the instructions and then drop you into the game. It's easy enough to figure out without a complex tutorial. Good sounds and music too. I could see this being really fun, especially if you had some kind of system where you have to figure out which weapons are the most effective for which monster. (For example: instead of killing them in one hit, they do X or Y damage.)

This is great feedback!

It sounds like I need to rework the intro a little bit more.

The idea of crafting different weapons for different monsters is an interesting one. I'll have to give it a think... maybe a non 'Teeny Tiny' version.

This was a fun little game. I liked that it highlighted what I should have clicked on. My only complaint was that the text was difficult to read. 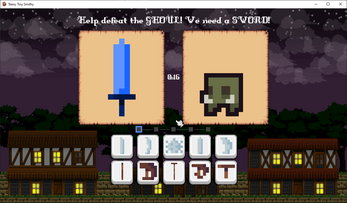 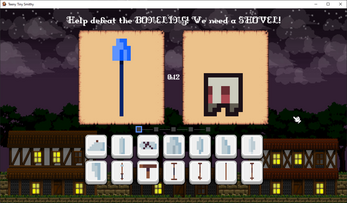